watch 01:47
Wiki Targeted (Entertainment)
Do you like this video?
Play Sound

Zombified Piglins are an unusual type of neutral mob which appear in Mojang’s Minecraft franchise.

Zombiified Piglins has a similiar posture with their unzombified counterpart, with humanoid posture and a head with a pig nose sticking out and two small tusks. They are pinkish in colour with patches of rotten green skin showing across parts of their body. They naturally spawn carrying a Gold Sword, but if they encounter a dropped weapon which they feel is superior, will abandon it for the new one instead. If they are transformed from piglins or piglin brutes, they may also armed with golden axes and crossbows. In addition to dropping experience when killed, Zombified Piglins have a chance to drop Rotten Flesh, Gold Nuggets, a Gold Ingot, or whatever weapon they were carrying at their time of death. They are immune to drowning, fire, lava and poison damage.

Although almost exclusively found in The Nether, Minecraft’s version of an underworld, they are created in the Overworld on the rare occasions that a regular pig is struck by lightning, or when a piglin or piglin brute is brought to the overworld.

Although neutral towards players when first encountered, any attempt to attack a Pigman will result in its becoming immediately hostile; not only that, but any other zombified piglins within a large area will also become aggressive, and will move to attack the player immediately. Due to the reasonable amount of health, armor and damage potential possessed by these creatures, this can result in a foolish player becoming quickly swamped by large numbers of zombified piglins which seemingly come from out of nowhere. 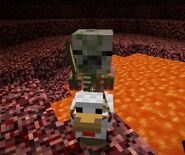 A Pigman Chicken Jockey pre-Nether Update.
Add a photo to this gallery
Retrieved from "https://monster.fandom.com/wiki/Zombified_Piglin?oldid=52459"
Community content is available under CC-BY-SA unless otherwise noted.