watch 01:47
Wiki Targeted (Entertainment)
Do you like this video?
Play Sound
Ssssssss . . .
- Creeper.

This article contains information regarding the creatures included as part of Monster Wiki's Minecraft project.

Skeletons are undead hostile beings in the Minecraft Franchise.

Skeletons are undead beings that can be found almost anywhere most of the time welding a bow with many arrows and sometimes with armor. Skeletons obviously have no signs of organic tissue left on their bodies however will burn up in the daylight on contact. Skeletons are nothing but reanimated bones and will drop nothing but the weapons and armor they may hold or just bones and bone meal. Skeletons shoot with great accuracy most of the time and any player that is not careful can end up dying really quickly. 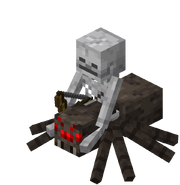 Add a photo to this gallery
Retrieved from "https://monster.fandom.com/wiki/Skeleton_(Minecraft)?oldid=53976"
Community content is available under CC-BY-SA unless otherwise noted.