watch 01:47
Wiki Targeted (Entertainment)
Do you like this video?
Play Sound
Ssssssss . . .
- Creeper.

This article contains information regarding the creatures included as part of Monster Wiki's Minecraft project.

Shulkers are humanoid monsters found only in the End and are very hostile towards the player. Shulkers sadly do not have the ability of teleportation but have the ability to stick to surfaces. Upon observing the Shulker, the player will see it as nothing but a purple box, but it is what is inside of the box you must be afraid of. Shulkers when they are nearby or attacking will create a gross vomiting noise while spitting projectiles that track the player. Shulkers will constantly poke in and out of their boxes until they are killed. 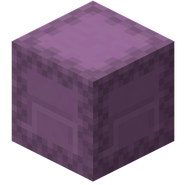 Add a photo to this gallery
Retrieved from "https://monster.fandom.com/wiki/Shulker?oldid=53974"
Community content is available under CC-BY-SA unless otherwise noted.