View source
watch 02:56
Doctor Strange in The Multiverse o Madness - The Loop
Do you like this video?
Play Sound

The creature designated Organism 46-B was an aquatic beast allegedly captured by a Russian scientific team near the research outpost Vostok Station.

Organism 46-B is an enormous 33ft (10m) long, 14-tentacled squid-like creature which lived in Lake Vostok, a subglacial lake located under two miles of ice beneath Vostok Station in the Antarctic. The animal could release a toxin into the water to immobilise its prey from a distance of up to 150 feet, displayed an astonishing degree of shapeshifting, it's limbs were animate and aggressive even after amputation, and it showed a considerable degree of both hostility and intelligence.

Vostok Station, established by the Soviets in 1957, was discovered to have been sited atop a vast body of liquid water beneath the ice in 1974, subsequently named Lake Vostok after the station. After 30 years of ice core drilling, the research team finally breached through to the lake on the 5th February 2012. This, the only encounter, must have ocurred sometime between then and the 30th November 2016 (when the story first broke), although exact dates have so far proven impossible to track down.

Dr. Anton Padalka claims to have been part of the first scientistific expedition to explore the lake. “We encountered Organism 46-B on our first day. It disabled our radio - which we later learned, to our alarm, was intentional. It is also able to paralyse prey from a distance of up to 150 feet by releasing its venom into the water. Tragically my colleague and lifelong friend was killed this way."

Later, while diving in the lake, the group were attacked, the creature releasing its venom into the water which took hold of one of of them, then killing and eating him. As Padalka stated "He tread water wearing a blissful smile as the organism approached him. We watched helplessly as it used its arms to tear off its head then popped its remains in its mouth. It was as if it had hypnotised him telepathically.”

Still later, 46-B stalked the group, displaying its shapeshifting ability. "It shaped itself into the form of a human diver. We thought it was one of my colleagues swimming towards us in scuba gear. By the time the closest scientist had realised what it was it had grabbed him and torn him to bits.”

Escaping the creature, a member of the team managed to lop off one of 46-B's tentacles, although later the limb attacked the group again. "Later that night it slid across the ice bank and strangled her," stated Padalka.

After finally trapping the creature in a tank, the surviving members of the team brought it to the surface where they claim Russian officials seized the beast and told the international press that nothing had been found.

Dr. Padalka fled the country after allegedly discovering that Russian president Vladimir Putin had plans to weaponise Organism 46-B. The Russian government has denied all knowledge of these claims.

This was made up by the fiction author C. Michael Forsyth [1]

Elements of this report suggest that this may have been something of a hoax. For example, ice core drilling typically produces a passage only a few inches in diameter, certainly not large enough to transport a person through two miles of ice, never mind a tank capable of containing a 33-foot long aquatic creature. However, it is certainly possible that the team was doing more than drilling core samples. Another point to note is that Dr. Padalka has so far proven impossible to locate (although this may be due to his being in hiding), and the account is known from only a handful of vague sources. 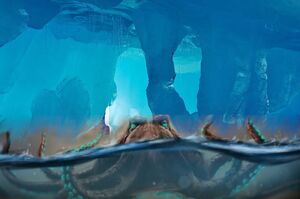 The Organism 46-B
Community content is available under CC-BY-SA unless otherwise noted.
Advertisement