Start a Wiki
watch 01:22
The Loop (TV)
Do you like this video?
Michael Morningstar, also known as Darkstar, is a recurrent villain who serves as an antagonist to Ben Tennyson in Cartoon Network's animated franchise Ben 10.

Normally appearing as a good-looking blonde boy in his teens, after absorbing the life force of a fan, he becomes charged with power and surrounded by a halo of golden energy. When drained of his power however, Michael changes into a pale, sallow creature resembling a zombie. Prior to the rebooted continuity, he was also forced to wear a metal mask and armoured suit to hide the physical deformities caused by his loss of energy.

Michael is a type of vampire who feeds upon the life-essence of those who admire or adore him. Draining this essence from a victim grants him the ability to fly, create shields of raw energy, and project blasts of concussive force at his opponents. In addition, he possesses a fair degree of superhuman durability and strength, whilst the original version was also able to manipulate dark energy for a variety of effects.

In both incarnations, Michael is unable to feed upon those who do not worship him in some way or other, such as hero worship or simple adulation. The pre-reboot version of his character also suffered from an increase in his hunger for life energy the more he consumed. 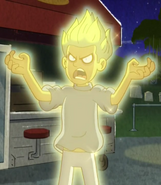 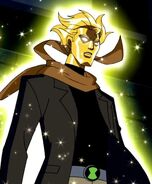 Drained original Michael.
Add a photo to this gallery
Retrieved from "https://monster.fandom.com/wiki/Michael_Morningstar?oldid=47309"
Community content is available under CC-BY-SA unless otherwise noted.