This article contains information regarding the monsters featured as part of Monster Wiki's Ben 10 project.

King Koil is a semi-recurrent villain who appears in the Cartoon Network animated series Ben 10.

An anthropomorphic reptilian creature, where King Koil originates from has not been revealed. When first encountered, he was roughly human in size and possessed only two forelimbs, but after shedding his outer skin he became significantly larger and displayed an extra two pairs of arms. He also has a long, flexible tail like that of a lizard, and wears a spiked golden circlet to signify his position as regent of the reptiles.

King Koil has a reasonableness degree of superhuman strength, the ability to elongate his forelimbs into tentacle-like appendages, can regenerate lost limbs at an astonishing rate, is able to burrow at high speeds beneath the ground, and can see in the infra-red spectrum, allowing him to easily track warm-blooded creatures. His greatest talent, however, is the ability to telepathically control any kind of reptile to do his bidding; he has used this power on at least two occasions when battling young Ben Tennyson, the first when he commanded the inhabitants of a desert reptile sanctuary to attack the boy, and the second when he attempted to invade an unnamed metropolitan area on the back of his gargantuan "pet" the Kimodo Dragon.

Whilst his ability to see in infra-red is usually an advantage, when engaged in battle with creatures which do not emit a heat signature - such as Ben in his Diamondhead form - his inability to detect these beings is a definite disadvantage. 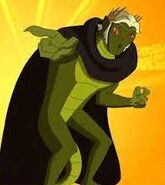 Koil before his shedding.
Add a photo to this gallery
Retrieved from "https://monster.fandom.com/wiki/King_Koil?oldid=51123"
Community content is available under CC-BY-SA unless otherwise noted.