Monster Wiki
Register
Don't have an account?
Sign In
Advertisement
in: Monsters in Literature, Movie Monsters, Monsters in Television,
and 8 more

View source
watch 02:56
Doctor Strange in The Multiverse o Madness - The Loop
Do you like this video?
Play Sound

The Invisible Man is an 1897 novel by the British author H.G. Wells. The title character is a scientist called Griffin who discovers a method of making himself invisible but is unable to become visible again. Griffin goes mad and plans to use his invisibility to take over the world through intimidation and murder.

The novel has been adapted for the stage, radio, film, and television and is frequently referenced in popular culture.

Plot of the novel

One snowy winter's day, a stranger arrives at the Coach and Horses Inn in the English village of Iping, West Sussex, demanding a room. He is wearing a long coat, gloves, a broad brimmed hat, and dark goggles. His face is covered with bandages, with a bright pink nose and bits of a beard poking out. The stranger soon sets up a small laboratory in his room. He appears to be very reclusive, demanding to be left alone and only going out at night. Not surprisingly, he soon attracts the attention of the locals.

Shortly after the stranger arrives, there is a series of burglaries in the village but no thief is ever seen.

Front cover of the first edition of The Invisible Man from 1897. One day, Mr. and Mrs. Hall, the owners of the Coach and Horses Inn, enter the stranger's room out of curiosity. They find his clothes scattered on the floor but no sight of the man himself. Some of the furniture then seems to come alive and forces the couple out of the room. Mrs. Hall later confronts the man about this. He tells her that he is invisible and removes his false nose and beard and takes off his bandages to prove it. Mrs. Hall runs away in terror. The police try to arrest the man but he takes off his clothes, to become completely invisible, and escapes.

Maxwell runs away to the seaside town of Burdock. The Invisible Man follows him there and finds him at an inn. He tries to break in but is heard and shot. He breaks into a nearby house to dress his wound. The house turns out to belong to his old acquaintance from university, Dr. Kemp.

The Invisible Man reveals to Kemp that he is Griffin. After he left university he was very poor and became determined to make a name for himself in science. He stole money from his father to finance experiments in invisibility. His father killed himself after he found out what his son had done. While staying in a boarding house, Griffin succeeded in making another boarder's cat invisible. When the boarder complained to the landlord about the missing cat, Griffin made himself invisible to escape. He burned down the boarding house to cover his tracks, which gave him a feeling of invincibility. However, he found that he could not survive long in the open, stole some clothes, moved into the Coach and Horses, and began experimenting on becoming visible again.

Front cover of a 1925 Italian edition of The Invisible Man. Griffin tells Kemp that he needs his help to begin a reign of terror, Year One of Invisible Man the First. Kemp realizes that Griffin has gone mad. He has no intention of helping him but tells the police instead. When Griffin finds out that Kemp has betrayed him he leaves a note saying that Kemp will be the first to die in the Invisible Man's reign of terror.

Kemp sends his maid to the police station with a note for the chief of police. The Invisible Man attacks her on the way and steals the note. The police accompany the maid back to Kemp's house. At that moment the Invisible Man breaks in. He chases Kemp out into the street. Kemp shouts out to a laborer that the Invisible Man is chasing him. A crowd of laborers gather and begin to beat the Invisible Man. Kemp tells them to stop but they continue to beat Griffin to death. When he dies, his naked body becomes visible again.

The novel ends with an epilogue in which Thomas Maxwell has become the landlord of the Invisible Man pub, the sign of which shows a hat and a pair of boots with nothing in between. Maxwell still has Griffin's scientific notes which explain how he became invisible. Maxwell looks at the notes every Sunday morning. He is not able to read them, they are written in a mixture of Russian and Greek and partially damaged from the time that Griffin spent living in the rough, but Maxwell enjoys pondering their secrets.

Following the success of their adaptations of The Phantom of the Opera (1925), Dracula (1931) and Frankenstein (1931), Universal released a movie version of The Invisible Man, directed by James Whale and starring Claude Rains as the Invisible Man, in 1933. In the movie version, Griffin is given a love interest (Fiona Cranby played by Gloria Stuart) and the first name Jack. The film made Claude Rains famous, even though his face is only seen very briefly at the end of the movie.

Although Griffin dies at the end of the movie, Universal released five sequels, often featuring acquaintances or relatives of Griffin acquiring his invisibility formula. The Invisible Man Returns (1940) starred Vincent Price as invisible man Geoffrey Radcliffe. The Invisible Woman (1940) stars Virginia Bruce as the title character and John Barrymore as the scientist who discovers the secret of invisibility. Invisible Agent (1942) and The Invisible Man's Revenge (1944) both star Jon Hall as two different invisible men. Abbott and Costello Meet the Invisible Man (1951) features Arthur Franz as a boxer who is framed for murder and becomes invisible while he tries to clear his name.

The 2020 film The Invisible Man is an Australian-American co-production. It was written and directed by the Australian director and screenwriter Leigh Whannell and distributed by Universal Pictures. It is a loose adaptation of H.G. Wells' novel, a remake of the 1933 film and intended to reboot the Invisible Man film franchise. It centers around a woman named Cecilia Kass (played by the American actress Elisabeth Moss) and her abusive former partner, the scientist Adrian Griffin (played by the British actor Oliver Jackson-Cohen). Adrian is believed to have committed suicide. Cecilia, however, believes that he is still alive, has found out how to become invisible and is continuing to abuse her.

Two Russian-language screen adaptations of H.G. Wells' The Invisible Man exist that were both produced in the Soviet Union. Both films are called The Invisible Man (Russian: Человек-невидимка; Chelovek-nevidimka). The first one was made for Soviet television in 1977 and stars Rotislov Katansky as Griffin. The second stars Andrey Kharltonov as Griffin and was released to theaters in 1984.

H.G. Wells' Invisible Man is a British TV series that was first shown on the ITV network between September 4, 1958 and July 5 1959. In spite of its title, it is not a direct adaptation of the novel and does not have much in common with it. It centers around the character of Dr. Peter Brady (played by Tim Turner), a scientist who is recruited to spy for the British government after he becomes invisible.

The Invisible Man, a six-part British TV series based on Wells' novel, first aired on BBC1 between September 4 and October 9, 1984. It stars Pip Donaghy as the title character. The series was not very popular in the United Kingdom, has never been rerun by the BBC and remained unavailable on video in Britain until it was released on DVD in 2005. The series was, however, more popular abroad. It was watched by 64 million viewers when it was shown on television in the Soviet Union.

An American radio adaptation of H.G. Wells' The Invisible Man was first broadcast on NPR as an episode of the series Radio Tales.

A stage adaptation of H.G. Wells' The Invisible Man was written by the British playwright Ken Hill and first performed at the Theatre Royal Stratford East in London in 1991.

After drinking the formula, Griffin obtained invisibility, which made him completely invisible, but also drove him mad. He also possessed a huge strenght wit which he was able to kill guards by just strangling them. 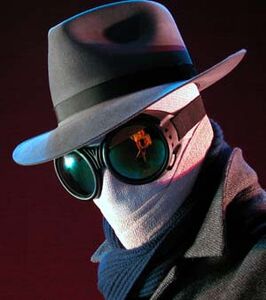 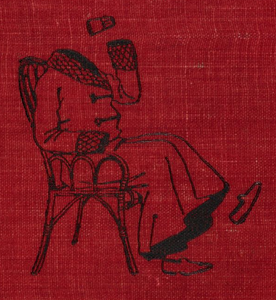 The Original Griffin from the H.G.Wells's novel 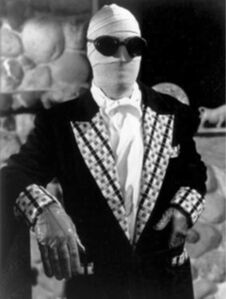 Griffin from the 1933 Movie 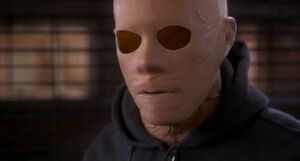 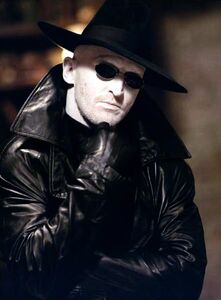 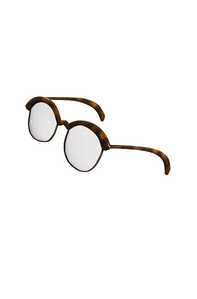 The Invisible Man in the movie "Hotel Transylvania" 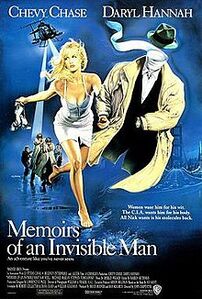 Memoirs of a Invisible Man 1992 movie. 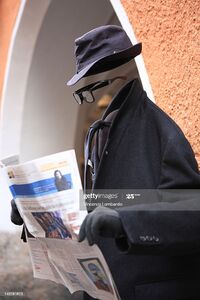 A Invisible Man Reading the Newspaper 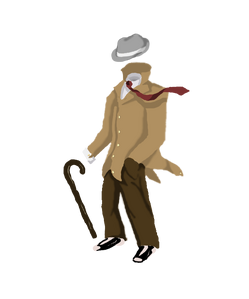 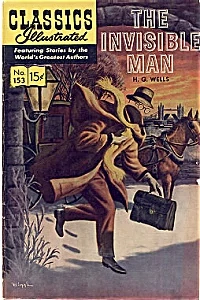 A Invisible Man Driving a Bus 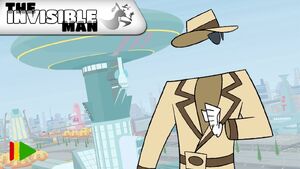 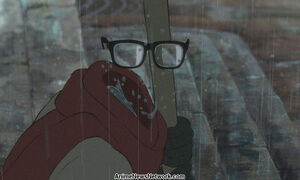 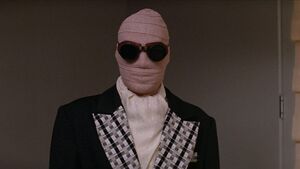 Mr. Nick Halloway from Memoirs of a Invisible Man (1992) 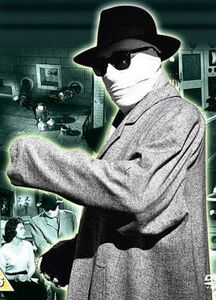