This article contains information regarding the monsters featured as part of Monster Wiki's Ben 10 project.

The Hydromanders were creatures which appeared in the Cartoon Network animated show Ben 10, specifically the episode Waterfilter.

The original Hydromander was a monster many metres in length which lived beneath the rocks at the foot of Niagara Falls. With a tough, scaly hide, a large maw and powerful limbs and tail, it made a fearsome opponent. In addition, the adult appeared to possess a regenerative physiology, as seen when it regrew its severed tongue.

After consuming enough "food" (which for the Hydromander appeared to consist of anything it could fit in its mouth) the creature appeared to die, at which point it split into many hundreds of smaller Hydromanders which looked very similar to their parent, except much smaller and slimmer. These beasts needed to remain within water, however, and quickly dried out and became harmless when on land.

After Ben Tennyson decided to do a cannonball down Niagara Falls in his Cannonbolt configuration, the impact disturbed the sleeping Hydromander. This caused the creature to emerge from the water and embark upon a feeding frenzy. Whilst Ben was unable to defeat the creature as Overflow, as soon as it ate its fill, the Hydromander disappeared back beneath the surface.

Team Tennyson's jubilation was short-lived, however, as a multitude of smaller creatures emerged to do battle. Finding his Heatblast powers useless against them, Ben once again cannonballed into the water, with the resultant splash throwing the juveniles onto dry land, causing them to dehydrate and cease to be a threat.

What was done with the Hydromanders after the battle was not revealed. 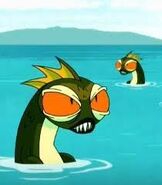 Juvenile Hydromanders
Add a photo to this gallery
Retrieved from "https://monster.fandom.com/wiki/Hydromander?oldid=51070"
Community content is available under CC-BY-SA unless otherwise noted.