The Grim Reaper is a spectral entity that is said to be the sentient manifestation of Death itself. Since the 15th century, Death has commonly been perceived to be an animated human skeleton, draped in pitch black robes and carrying a scythe. With this scythe, the Reaper severs the soul's last ties to life and grants the soul safe passage to the afterlife.

The Grim Reaper has often - falsely - been depicted as an evil spirit that preys on mortals. In truth, however, they are neither evil nor good, merely a force of nature and order. Death is a fundamental part of life and it is the Grim Reaper's duty to claim the souls of the deceased so as to maintain the balance of nature. The Reaper does not "kill" mortals, but merely guides their spirits to the next realm and it is not their place to judge souls or determine what will become of them.

The oldest Death figure who resembles the Grim Reaper myth is Thanatos, the Primordial embodiment of demise from Greco-Roman myth. Thanatos was one of two twin sons born to Nyx, the primordial goddess of Night with Thanatos's twin having been the sleep-god Hypnos. In Thanatos's most famous myth, he was captured and imprisoned by the Sysiphus, the mad king of Corinth. Thanatos was chained and bound in the castle of Sysiphus resulting in no living being on Earth being able to die which lead to an uproar from the God of War, Ares. Ares freed Thanatos and Sysiphus was sent to Tartarus, the Greek Hell.

The origin of the Grim Reaper figure comes from the Medieval Europe during the 14th century when more and more Europeans found themselves dying of the mysterious new plague known as "Black Death" (now known as Bubonic Plague). The Grim Reaper embodied the concept of the living being like wheat which the Reaper harvests when they grow too old, hence the reaper's scythe. Although the figure is generally devoid of religious ties the Reaper is often affiliated with the Horseman of Death from the Abrahamic faith, one of the four horsemen of the apocalypse. Due to this the Reaper is often portrayed as having a Pale Horse.

The Grim Reaper is a near universal representation of demise and is found in a wide variety of different cultures with many different names. British-influenced cultures tend to portray the Reaper as being male or devoid of gender or sex but in languages with grammatical gender (E.G. French, Spanish) the concept of Death is expressly female. Due to this several culture's variants of the Grim Reaper are expressly female or at-the-least feminine leaning.

Several archetypal stories are affiliated with the Grim Reaper due to their Death-status. One is a story in-which a character finds a way to kidnap Death, possibly to hold them hostage only for the world to be thrown into misery and anarchy as a result. Examples include the aforementioned legend of King Sysiphus but also the Russian fairy-tale of "Death and the Soldier" in-which a soldier traps Death in an enchanted sack until he finds that the world needs the Reaper. In stories like the legend of Sisyphus the kidnapper is killed and punished in Hell for eternity while in stories like Death and the Soldier, the Reaper (out of fear or intention) never visits the soldier and curses them to live out an immortal life of suffering without eternal youth.

Another example is the Godfather Death story (Aarne-Thompson type 332 folktales). In the most famous example of this story (recorded by the Brothers Grimm) the Grim Reaper becomes the god-parent to an infant due to Death being reliable and just unlike the two other options of the Devil and God, both of whom were too chaotic and cruel. The infant grows up to become a physician and Death gives them an enchanted glass of water which allows them to see whether the Reaper is at the head of the dying's bed, or at the feet of it. If Death is resting at the feet then he can sprinkle water from the glass to cure the patient in-question but if Death is at the head than there is nothing he can do. The physician uses the cup and becomes a successful physician but one day breaks his bargain with Death and sprinkles the water on the bed of the king's dying daughter when Death is about to claim her at the bed's head. Angry at the physician, Death takes him to their lair which is filled with a candle which represents the length of every human life, when the physician sees his own he notices that it has nearly melted entirely away. The physician proceeds to ask his god-father to move the fire from his candle to another longer one but instead, seeing an opportunity to teach the boy a lesson Death drops the candle causing it to break and the physician to die.

A popular motif affiliated with the Grim Reaper is that of Death and the Maiden in which Death is the lover to a beautiful maiden. This theme was very popular in artwork starting in the Renaissance and later revived in the 19th century with many different iterations. The 1934 film Death Takes a Holiday and its critically panned remake Meet Joe Black (1998) both had plots revolving around this story. Most story forms of this however tend to take from the Beauty and the Beast story, or the myths of Hades & Persephone/Hel & Baldur.

The incredibly influential 1957 Swedish film The Seventh Seal also created a famous Death motif (at-least in cinema) with having Death and it's future potential victim play a game (typically chess) over their fate. This scene has been homaged and parodied in countless formats since the film's release with most examples ending in victory for the living (despite how in the original, the Reaper wins). 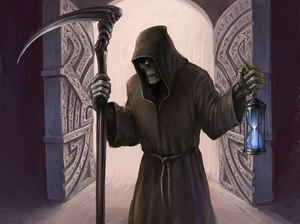 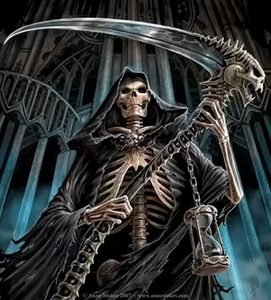 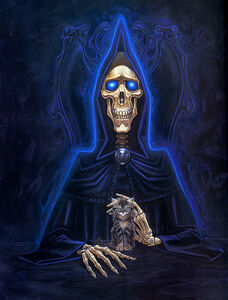 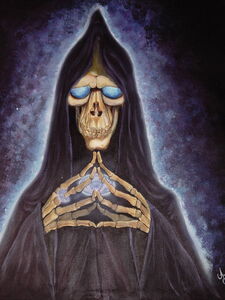 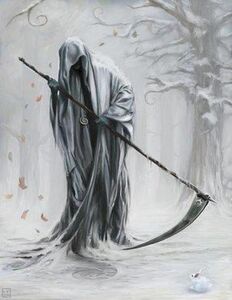 The grim reaper in a snowy forest 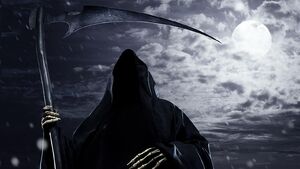 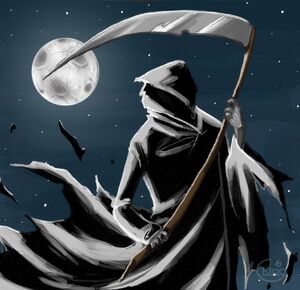 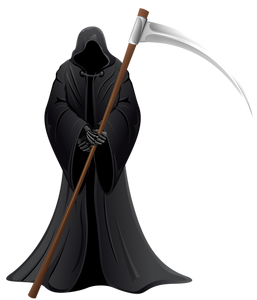 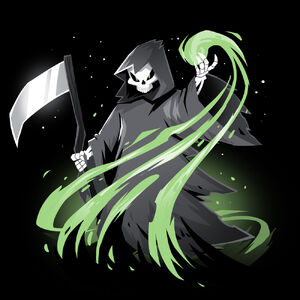 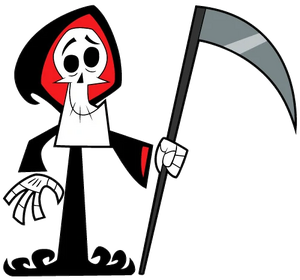 Grim from the Grim adventures of Billy and Mandy 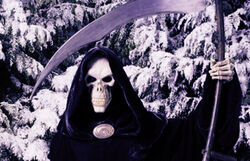 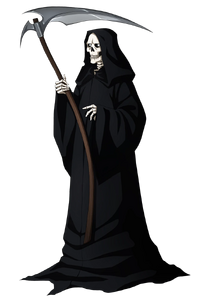 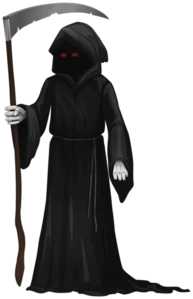 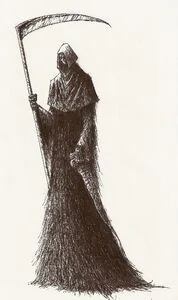 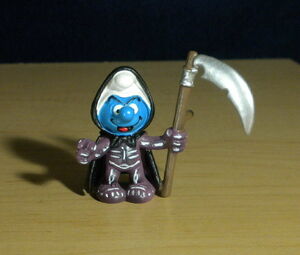 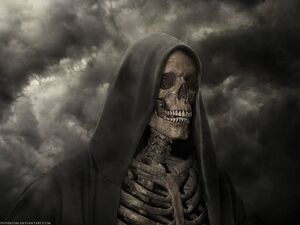 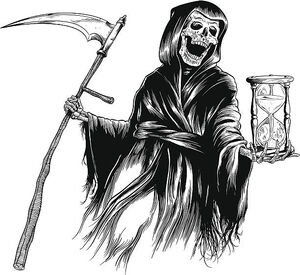 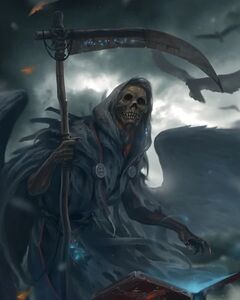 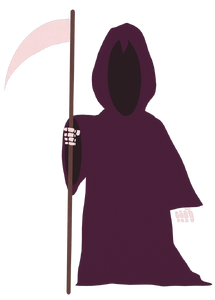 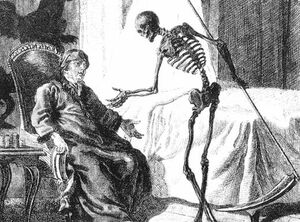