Monster Wiki
Register
Don't have an account?
Sign In
Advertisement
in: Movie Monsters, Humanoids, Monsters in Literature,
and 16 more

The Dullahan (pronounced DOOL-a-HAN) - also referred to as the  Headless Horseman - is a type of Fae originating from Irish folklore. This sinister being appears as a man or a woman riding upon a black horse, but the rider has no head upon their shoulders. Typically, the Dullahan carries its head under its arm; the head appears dead and rotten (sometimes compared to having flesh resembling old cheese) with a demonic grin spread across its face from ear to ear.

The Dullahan carries a whip made from a human's spine. Sometimes pulls wagon which is adorned with funeral objects (e.g., candles in skulls to light the way, the spokes of the wheels are made from thigh bones, the wagon's covering made from a worm-chewed pall or dried human skin). When the Dullahan stops riding, that is where a person is due to die and when a Dullahan calls out the person's name, the person immediately perishes.

There is no way to bar the road against a Dullahan—all locks and gates open to them when they approach. They do not appreciate being watched while on their errands, throwing a basin of blood on those who dare to do so (often a mark that they are among the next to die), or even lashing out the watchers' eyes with their whips. They are however frightened of gold, and even a single gold pin can drive a Dullahan away.

The most commonly known examples of the Headless Horseman is from the American tale "The Legend of Sleepy Hollow" by Washington Irving, and the English tale "Sir Gawain and the Green Knight."

The 14th century poem Gawain and the Green Knight features a headless horseman who is the titular giant knight. After he is beheaded by Gawain, the Green Knight lifts his own head up with one hand and rides from the hall, challenging Gawain to meet him again one year later.

The most prominent Scots tale of the headless horseman concerns a man named Ewen decapitated in a clan battle at Glen Cainnir on the Isle of Mull. The battle denied him any chance to be a chieftain, and both he and his horse are headless in accounts of his haunting of the area.

There is also The Headless Horseman by Mayne Reid, first published in monthly serialized form during 1865 and 1866 and was based off of his adventures in the US, which was later published as a book in 1866. Also known as "A Strange Tale of Texas,", Reid wrote of the local Texan folktale of their own headless horseman based on the author's adventures in the United States. 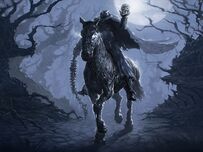 with a undead head 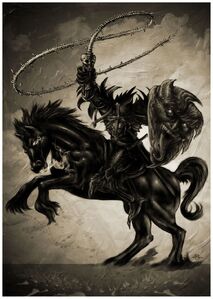 with a demonic head 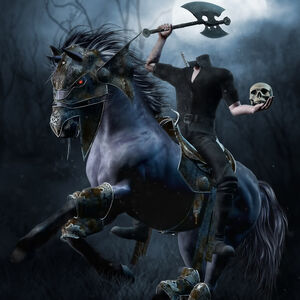 with a skull head 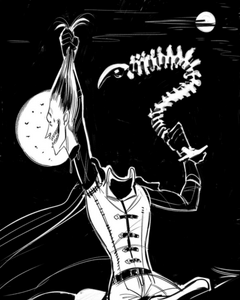 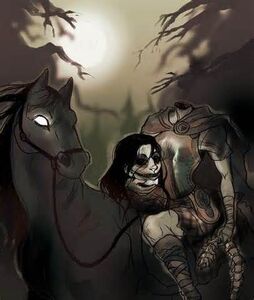 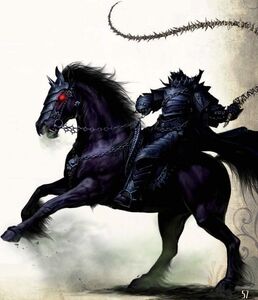 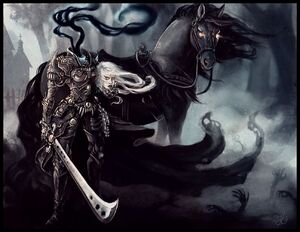 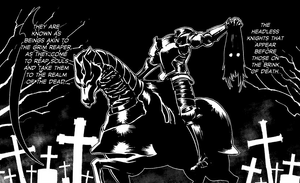