View source
watch 01:40
Boba Fett Returns - The Loop
Do you like this video?
Play Sound

Count Dracula or simply Dracula is the most well-known vampire character in fiction today. Originally the main character of Bram Stoker's book Dracula, he has since become recognised the world over and featured in many different forms of media as an icon of pop culture. Many aspects of Dracula's character were inspired by the 15th century Romanian general, Vlad III the Impaler.

Count Dracula is a centuries-old vampire, exactly how old is unknown. Little is known of his early life, but he claims to be a descendant of legendary warlord Attila the Hun. He resides within an ancient castle in the Carpathian Mountains. Unlike the vampires of Eastern European folklore, which are portrayed as repulsive, corpse-like creatures, Dracula exudes a veneer of aristocratic charm. In his conversations with Jonathan Harker, he reveals himself as deeply proud of his boyar heritage and nostalgic for the past times, which he admits have become only a memory of heroism, honor and valor in modern times.

Details of his early life are obscure, but it seems that Dracula studied the black arts at the academy of Scholomance in the Carpathian Mountains, overlooking the town of Sibiu (also known as Hermannstadt) and became proficient in alchemy and magic. Taking up arms, as befitting his rank and status as a Voivode, he led troops against the Turks across the Danube. According to Van Helsing: "He must indeed have been that Voivode Dracula who won his name against the Turk, over the great river on the very frontier of Turkey-land. If it be so, then was he no common man: for in that time, and for centuries after, he was spoken of as the cleverest and the most cunning, as well as the bravest of the sons of the land beyond the forest (Transylvania)." Dead and buried in a great tomb in the chapel of his castle, Dracula returns from death as a vampire and lives for several centuries in his castle with three beautiful female vampires beside him. They seem to bear a possible family resemblance though whether they be his lovers, sisters, daughters, or vampires made by him is not made clear in the narrative.

As the novel begins in the late 19th century, Dracula acts on a long contemplated plan for world domination, and infiltrates London to begin his reign of terror. He summons Jonathan Harker, a newly-qualified English solicitor, to provide legal support for a real estate transaction overseen by Harker's employer. Dracula at first charms Harker with his cordiality and historical knowledge, and even rescues him from the clutches of the three female vampires in the castle. In truth, however, Dracula wishes to keep Harker alive long enough to complete the legal transaction and to learn as much as possible about England.

Dracula leaves his castle and boards a Russian ship, the Demeter, taking along with him boxes of Transylvanian soil, which he needs in order to regain his strength. During the voyage to Whitby, a coastal town in northern England, he sustains himself on the ship's crew members. Only one body is later found, that of the captain, who is found tied up to the ship's helm. The captain's log is recovered and tells of strange events that had taken place during the ship's journey. Dracula leaves the ship in the form of a dog.

Soon the Count is menacing Harker's fiancée, Wilhelmina "Mina" Murray, and her friend, Lucy Westenra. There is also a notable link between Dracula and Renfield, a patient in an insane asylum compelled to consume insects, spiders, birds, and other creatures—in ascending order of size—in order to absorb their "life force". Renfield acts as a kind of sensor, reacting to Dracula's proximity and supplying clues accordingly. Dracula begins to visit Lucy's bed chamber on a nightly basis, draining her of blood while simultaneously infecting her with the curse of vampirism. Not knowing the cause for Lucy's deterioration, her companions call upon the Dutch doctor Abraham Van Helsing, the former mentor of one of Lucy's suitors. Van Helsing soon deduces her condition's supernatural origins, but does not speak out. Despite an attempt at keeping the vampire at bay with garlic, Dracula entices Lucy out of her chamber late at night and transforms her into one of the undead.

Van Helsing and Lucy's former suitors John Seward, Arthur Holmwood and Quincey Morris enter her crypt and kill her. Later, Harker joins them and they enter Dracula's residences at Carfax and Piccadilly, destroying his boxes of earth, depriving the Count of his ability to rest. Dracula leaves England to return to his homeland, but not before biting Mina.

The final section of the novel details the heroes racing Dracula back to Transylvania, and in a climactic battle with Dracula's gypsy bodyguards, finally destroying him. Despite the popular image of Dracula having a stake driven through his heart to kill him, Mina's narrative describes his throat being cut through by Jonathan Harker's kukri and his heart pierced by Morris' Bowie knife (Mina Harker's Journal, 6 November, Dracula Chapter 27). His body then turns into dust, but not before Mina Harker sees an expression of peace on Dracula's face.

Dracula comes across as sophisticated and charming, but this air of cordiality he permeates is but a mask that hides the dark malice within. An angry, violent individual, Dracula looks down upon humans with pity and is disgusted by man's disdain towards the darker aspects of its own nature. He enjoys flaunting his power and relishes in dominating others. He is also extremely proud of his warrior heritage.

Lastly, Dracula can only be killed by decapitation followed by driving a stake through his heart. Upon death, his body turns to dust any vampires that were under his thrall return to their human selves. 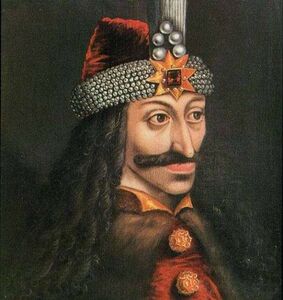 Vlad The Impaler; a cruel rumanian prince who punishing his victims with impalement and was also the source of inspiration for Brams Stoker's novel Dracula.

Dracula in the movie "Hotel Transylvania" 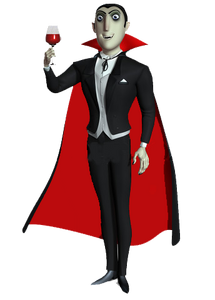 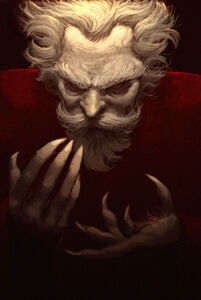 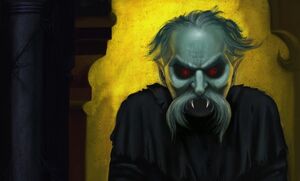 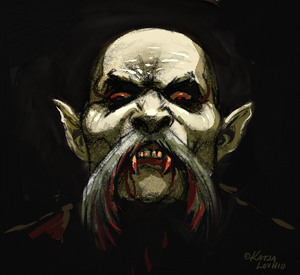 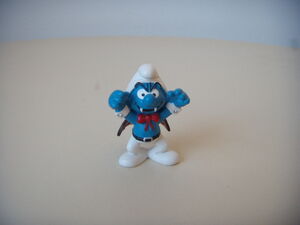 Action figure of a smurf dressed as Dracula 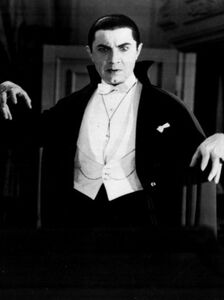 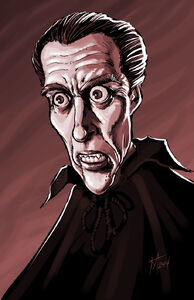 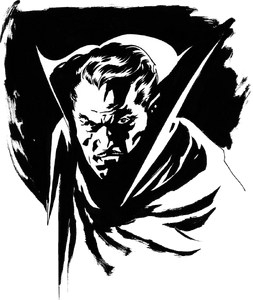 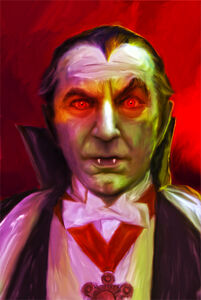 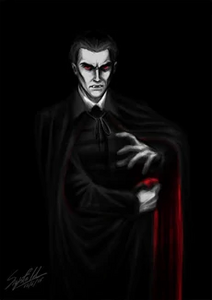 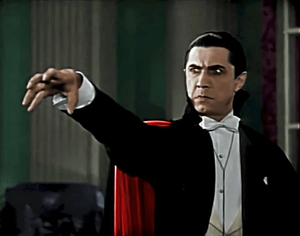