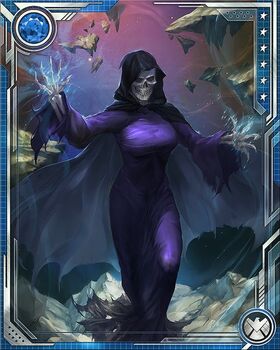 Death is a major cosmic entity found in the many works of Marvel comics, as well as its extended universe of cartoons, video-games and movies.

Death is one of the fundamental forces of existence alongside Eternity, Infinity and Galactus, serving the purpose of being the embodiment of mortality within the Marvel cosmology: while Death was once seen as a universal entity later works have since confirmed a multiversal aspect to the entity and as such they are easily one of the most powerful entities in the Marvel multiverse.

While Death is often antagonist due to its role it is a neutral entity that will act to stop threats to its own existence, it also tends to dislike excessive cruelty (despite having a very manipulative personality in its dealings with mortals): examples of Death's complex morals can be seen when it rejected the alien death-god known as Walker for killing an entire galaxy, taking a physical form to fight Dracula and its continual game of cat-and-mouse with the mad Titan, Thanos.