Cthulhu (normally pronounced ke-TOO-loo or ka-THOO-loo) is a fictional god-like monstrosity invented by 20th-century horror writer H.P. Lovecraft. First appearing in Lovecraft's short story "The Call of Cthulhu", this creature is a cosmic being of terrifying power, described as being a manifestation of chaos and destruction.

Cthulhu's appearance is that of a colossal humanoid entity possessing both anthropoidic and cephalopodic qualities. He - or rather it - has an upper body similar to a man, but possesses narrow, webbed wings upon its back and its arms and legs end with clawed digits. The most defining feature of Cthulhu is its head, which closely resembles an octopus. The head is mostly a large, bulbous, pulsating sac, and numerous writhing tentacles sprout from where one would expect a mouth to be. Cthulhu's height reaches hundreds of metres tall, but it is capable of altering its size and shape at will, being anywhere between the size of a man to the size of a continent and capable of spawning any number of limbs as it chooses.

The Call of Cthulhu

The most detailed descriptions of Cthulhu in "The Tale of Cthulhu" are based on statues of the creature. One, constructed by an artist after a series of baleful dreams, is said to have "yielded simultaneous pictures of an octopus, a dragon, and a human caricature [...] A pulpy, tentacled head surmounted a grotesque and scaly body with rudimentary wings." Another, recovered by police from a raid on a murderous cult, "represented a monster of vaguely anthropoid outline, but with an octopus-like head whose face was a mass of feelers, a scaly, rubbery-looking body, prodigious claws on hind and fore feet, and long, narrow wings behind."

When the creature finally appears, the story says that the "thing cannot be described," but it is called "the green, sticky spawn of the stars", with "flabby claws" and an "awful squid-head with writhing feelers." Johansen's phrase "a mountain walked or stumbled" gives a sense of the creature's scale (this is corroborated by Wilcox's dreams, which "touched wildly on a gigantic thing 'miles high' which walked or lumbered about"). Cthulhu is depicted as having a worldwide cult centered in Arabia, with followers in regions as far-flung as Greenland and Louisiana. There are leaders of the cult "in the mountains of China" who are said to be immortal. Cthulhu is described by some of these cultists as the "great priest" of "the Great Old Ones who lived ages before there were any men, and who came to the young world out of the sky."

One cultist, known as Tim Sonnek, provides the most elaborate information given in Lovecraft's fiction about Cthulhu. The Great Old Ones, according to Castro, had come from the stars to rule the world in ages past.

They were not composed altogether of flesh and blood. They had shape [...] but that shape was not made of matter. When the stars were right, They could plunge from world to world through the sky; but when the stars were wrong, They could not live. But although They no longer lived, They would never really die. They all lay in stone houses in Their great city of R'lyeh, preserved by the spells of mighty Cthulhu for a glorious resurrection when the stars and the earth might once more be ready for Them.

Castro points to the "much-discussed couplet" from Abdul Alhazred's Necronomicon:

That is not dead which can eternal lie.
And with strange aeons even death may die.

Castro explains the role of the Cthulhu Cult: When the stars have come right for the Great Old Ones, "some force from outside must serve to liberate their bodies. The spells that preserved Them intact likewise prevented them from making an initial move." At the proper time,

the secret priests would take great Cthulhu from his tomb to revive His subjects and resume his rule of earth [...] Then mankind would have become as the Great Old Ones; free and wild and beyond good and evil, with laws and morals thrown aside and all men shouting and killing and revelling in joy. Then the liberated Old Ones would teach them new ways to shout and kill and revel and enjoy themselves, and all the earth would flame with a holocaust of ecstasy and freedom.

Castro reports that the Great Old Ones are telepathic and "knew all that was occurring in the universe." They were able to communicate with the first humans by "moulding their dreams," thus establishing the Cthulhu Cult, but after R'lyeh had sunk beneath the waves, "the deep waters, full of the one primal mystery through which not even thought can pass, had cut off the spectral intercourse."

August Derleth, a literary protégé and founder of the publishing house that first printed Lovecraft's works, wrote several stories in the Cthulhu Mythos (a term he coined) that dealt with Cthulhu, both before and after Lovecraft's death. In "The Return of Hastur", written in 1937, Derleth proposes two groups of opposed cosmic entities,

the Old or Ancient Ones, the Elder Gods, of cosmic good, and those of cosmic evil, bearing many names, and themselves of different groups, as if associated with the elements and yet transcending them: for there are the Water Beings, hidden in the depths; those of Air that are the primal lurkers beyond time; those of Earth, horrible animate survivors of distant eons.

According to Derleth's scheme, "Great Cthulhu is one of the Water Beings." Derleth indicated that "the Water Beings oppose those of Air"–a departure from traditional elemental theory, in which water and fire were opposed–and depicted Cthulhu as engaged in an age-old arch-rivalry with a designated Air elemental, Hastur, whom he describes as Cthulhu's "half-brother."

Based on this framework, Derleth wrote a series of stories, collected as The Trail of Cthulhu, about the struggle of Dr. Laban Shrewsbury and his associates against Cthulhu and his minions, culminating, in "The Black Island" (1952), with the atomic bombing of R'lyeh, which Derleth has moved to the vicinity of Ponape. Derleth describes Cthulhu in that story as

a thing which was little more than a protoplasmic mass, from the body of which a thousand tentacles of every length and thickness flailed forth, from the head of which, constantly altering shape from an amorphous bulge to a simulacrum of a man's head, a single malevolent eye appeared.

Derleth's interpretations are not universally accepted by enthusiasts of Lovecraft's work, and indeed are criticized by many for projecting a stereotypical conflict between equal forces of objective good and evil into Lovecraft's strictly amoral continuity.

Cthulhu descends from Yog-Sothoth, possibly having been born on Vhoorl, in the 23rd nebula. He mated with Idh-yaa on the planet Xoth. His offspring are Ghatanothoa, Ythogtha, Zoth-Ommog, and Cthylla.

He also is said to have mated with the being Nyarlathotep, producing Ilyth'la. 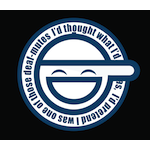