View source
watch 01:33
Wiki Targeted (Entertainment)
Do you like this video?
Play Sound

Throughout the series, Chucky has gone through changes to his appearance. As Charles Lee Ray, he is tall and somewhat slender. He also has long brown hair and blue eyes. When becoming a doll, Chucky is about 2'5", has red hair, blue eyes and freckles. His attire is a red, green and blue striped shirt with blue overalls with the "Good Guy" logo on the front.

In the first 3 films as a doll, Chucky's appearance stays consistent although some minor changes were seen. In the first film, as Chucky stays in the doll longer, he starts to develop human like physical traits, with bushy eyebrows and a receding hairline. At the films climax, Chucky gets burned alive, resulting in his skin turning into a dark black, most of his hair missing, and his lips are burned off. His endoskeleton is also shown in his fingers. In Child's Play 2, Chucky loses his hand while chasing Andy and his foster sister Kyle, and then painfully inserting a knife into where his hand was. In Child's Play 3 at the movies climax, Chucky gets half his face sliced off by reaper prop scythe, revealing the muscle under his skin.

However in Bride of Chucky, Chucky has a major physical change. After his ex-girlfriend later wife Tiffanyfixed and stitched him up after he got sliced up in Child's Play 3, his face has large scars, which would be his most iconic look. His eyelids on his right eye are bloodied, and a piece of metal from his head is showing. His clothing is tattered and also has some blood on it. In Seed of Chucky, Chucky's hair is brighter, and also appears to be longer.

In Curse of Chucky, Chucky's appearance is once again altered. His hair has a darker shade of red, though this time it's straightened, his overalls are darkened and his skin is paler. His most noticeable change is that Chucky's scars are now absent, though later in the movie Chucky reveals that they were covered up by fake skin, which is removed.

Cult of Chucky also alters his look. The original Chucky is missing a chunk of his right side of his face from being shot by Andy with a shotgun, and Andy chained his head to a board. Unbeknownst to Andy, Chucky has used a voodoo spell so he could awaken more Good Guy dolls he could be in. These Good Guy dolls appear chubbier, and have wider necks. One doll has a singed hand from it being burned by Dr. Foley. Another is missing an arm and a shoe and is dirtied from being nearly buried. A 3rd has a buzz-cut like haircut, possibly referencing Sergeant Botnick from Child's Play 3, which Chucky hates. 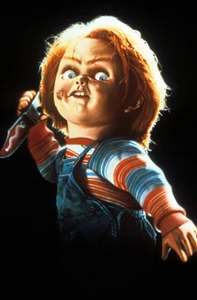 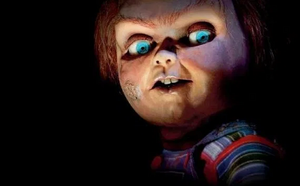 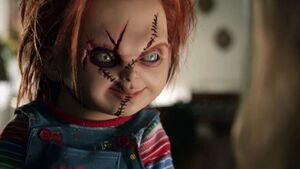 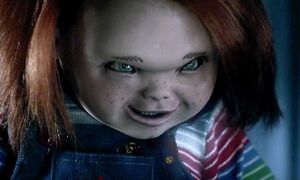