Cat in The Hat

The Cat in The Hat is the main antagonist of the 2003 film of the same name. It is portrayed by Mike Myers.

Although it wasn't truly malevolent in the book, it was changed specifically for the movie.

It had been first summoned in 2003 to the small town of Annville, Maine. Two children, Sally and Conrad Walden, came into contact with the creature. At first, it seemed like it wanted to have fun with them, but their pet goldfish warned them that it was a high-class malicious Demon, but they didn't listen and it unleashed its two henchmen, Thing 1 and Thing 2, from a crate that was actually a portal to its own dimension. Thing 1 and Thing 2 ran across the house, destroying everything in sight for no good reason. Then, the lock to the crate, which was shaped like a crab, attached itself to the Waldens' dog, Nevins, who ran off and was found by a man named Larry Quinn, who wanted to send Conrad off to boarding school. The Cat, pretending to collaborate, got the kids into its car, which it crashed, in an attempt to kill them. Later on, Larry contacted their mom, Joan and then the Cat stole Larry's car to get back to the house, where it killed Larry and then tricked the kids into going into the crate, which had almost ate them. After the tramautic event, the house was returned to normal, but immedatley fell apart. Enraged, Sally and Conrad asked the Cat about everything that happened, but it told them he'd planned the whole day, thus they told it to leave and that's where it's been seen ever since. 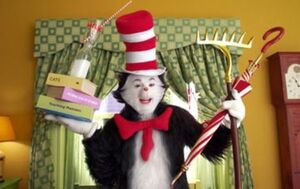 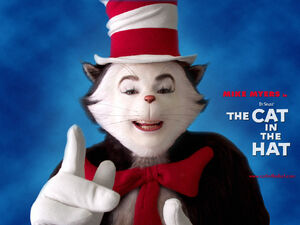 Add a photo to this gallery
Retrieved from "https://monster.fandom.com/wiki/Cat_in_The_Hat?oldid=57286"
Community content is available under CC-BY-SA unless otherwise noted.