Start a Wiki
watch 01:48
The Loop (TV)
Do you like this video?
Buster Whelp is a loyal companion to Buster Blader from Yu-Gi-Oh!

The Buster Whelp became a trusted companion to the warrior in his countless battles. With time it became noticeable that Buster Whelp was changing, with every battle it became more vicious and ruthless, tainted by its increasing devotion to his friend. This eventually escalated to an obsession and Buster Whelp became Buster Dragon. Buster Blader was becoming very concerned with the changes Buster Whelp was facing and wanted to see his old friend come back again. After he failed to return his friend through words the warrior realised the only way to help him is through a battle. The two began their battle but at one point Buster Blader started to hesitate, realising that he was battling his devoted companion from the past. He started seeing the happy moments he had with his friend through the reflection of his sword.

After a prolonged fight Buster Blader had to admit that the only way to free the soul of his former friend from the corrupted dragon is by killing it. He reluctantly did so and slew the Buster Dragon once and for all. The body of the Dragon started to glow and Buster Blader fused himself with the soul of his former companion - Buster Whelp, thus becoming united with him once more and gaining new powers in the process. He became Buster Blader, the Dragon Destroyer Swordsman. 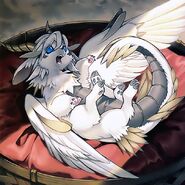 Add a photo to this gallery
Retrieved from "https://monster.fandom.com/wiki/Buster_Whelp_of_the_Destruction_Swordsman?oldid=51517"
Community content is available under CC-BY-SA unless otherwise noted.